From Cancer Turmoil to the Sublime Gift of Italy

From Cancer Turmoil to the Sublime Gift of Italy 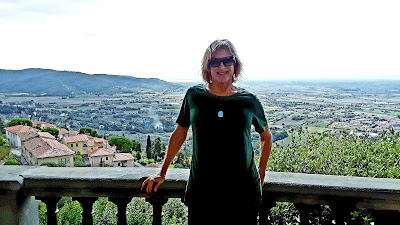 As breast cancer awareness month began to wind down as I just returned home from Italy, I felt compelled to write something. This last several years has been tumultuous, exhilarating, grueling and beauty-filled.

Surviving cervical cancer in my late 20's (curing myself holistically) and following a healthy path since, genetic breast cancer still caught up with me decades later. It made me think of my mother dying so young of breast cancer (I was age three) during a time when there was little support. It must have been so lonely for her. When I was diagnosed with a tumor in each breast, (5% category) my ordeal was launched. No one could've imagined (least of all me) that following a radical double mastectomy, I'd end up with a staph infection in the breast (due to genetic autoimmune) and more surgeries ensued with a 2nd staph infection that could've sent me to the other side.

Through all of it, and at times, wondering if I would survive, I sought moments of magic and beauty, kept writing (surprise acceptance & scholarship to Prague Summer Writing Program); continued surgeries and recoveries, relied on my indomitable spirit and a few close friends (indomitable spirits themselves) for counsel, love and support; continued to focus on time for writing/blogging even when I was foggy brained or not, and found myself with a book and (after four-years) on the other side of breast cancer.

I received a surprise gift when I was awarded a beautiful mermaid (ironic since 'mermaid' is within title of my book) healing retreat by sendmeonvacation.org I wrote a blog about my experience in Mexico with this important and special nonprofit organization, which was posted on SMOV's website and developed a special connection with the founder/director, Cathy Backus. Several months later, found myself invited to be an alumnus to attend the retreat in Cortona, Italy (Tuscany) as both mentor and facilitator where I'd share my workshop, "Healing and Living in Color". 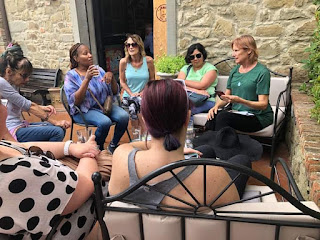 While my breast cancer journey was brutal (as it is for most women going through this), creating beauty and purpose became a drive to keep inspired and engaged in life. If my raw words of truth and the ways I found grace throughout, resonates or makes anyone feel less alone in their own challenging journey, then I have achieved what I'd hoped to. A first step in launching into this, was the honor and privilege of sharing time, as well as my workshop with the remarkable, engaging, and fun women at our SMOV retreat in Cortona where we stayed at the beautiful Resort and Spa.

When I received that fateful call that my round trip ticket was sponsored by a kind supporter of SMOV who donated miles, I knew that I was literally manifesting dreams from my writing in real time. One of my greatest visions was to be back in Italy once again after an extended stay in Europe as a 19 year old on a fashion/design study trip. I'd spent six weeks in Italy and felt so at home that I held the lofty dream of returning regularly. Life took many turns but the opportunity finally came into my life decades later. From Cortona, my adventures took me to Florence (where I spent my birthday), Lucca, Barga, Pietrasanta and then two-weeks in the glorious Liguria region on the coast where I stayed in Trebiano and ventured to many old villages and squares, Cinque Terre, and colorful fishing villages.

Sublime memories create powerful visions to hold close and recall whenever I choose to--A perfect way to 'live and heal through color'. Thank you, SMOV, Universe, as well as gratitude for my own strength, faith, and drive for truth and creative beauty.

Stay tuned: More on my many Italian adventures in the next blog. 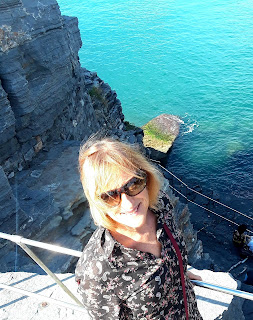