One of the more difficult things for a writer to do is hang in there, to persevere amongst all the rejection. The percentage of rejection vs acceptance is vast. To succeed, you must keep writing and submitting. I'm not one to have an excess of self-esteem so it takes a great deal of tenacity to carry on. Aside from friends that supported my writing, I met writer friends (one in particular) who had a way of simply not allowing me to give up. Pursuing any type of creative endeavor is not for the faint of heart.
Tenacity is something I know well. Being a forever survivor is in my DNA. I learned early as a toddler after losing my mother from breast cancer and hearing the word 'survivor' spoken by my father when I was three. I didn't know what it meant but I knew it was important... strong survival skills were also expected, just as being independent was encouraged and expected at a tender age.
I survived more than loss which not only included parents passing young but beloved friends leaving the planet far too early: cervical cancer and a long journey with breast cancer, #Metoo incidents, divorce from a troubling marriage of struggle with step kids; and working in a roller coaster ride environment known as Hollywood with a strong heart's desire to be a creative producer because I knew I'd be great at it. I loved movies, loved story, and became a story editor on screenplays. Hollywood is a tough place to find one's success no matter how good you may be. I was never able to quite get there even when I pulled out all the stops to prove myself.
Don't Let Anyone Steal Your Thunder
When a young and-not-so-great city college writing teacher recently (and naively) told me that I seemed consumed by my recent wins as a writer, that it could take years to come to a place of getting a book published, or any real success as an author and that I ought to not be pre-occupied with submission or getting published and that he knew many writers that don't answer emails for 4-months, which I could only take as him seeing that as being cool. This came as a response to my mentioning that I'd received an email about getting my bio updated because my scores were high for a finalist award in an International Writing Competition, which I ended up getting. I clearly responded by saying, "First of all, I'm not in a position to ignore emails of opportunity nor am I the type of person to be discourteous and ignore emails... that I don't have years to coast, and it's taken decades of experiences to bring me to this place right now." One of the many Literary agents (and only actual personal referral) I submitted a query letter to (who took months to get back to me) told me that unless I was published in a journal like the Paris Review, I didn't have much chance of ever getting my memoir published. I stepped back from everything for a month--the rejection comment so undid me. It was a wounding thing to say to any writer, especially an emerging one like myself. I took time to regroup, shared the incident with a couple writer friends far more seasoned than I clearly stating that the comment was not only untrue but unacceptable, which gave me the strength and energy to pick up the pieces and put myself out there again. 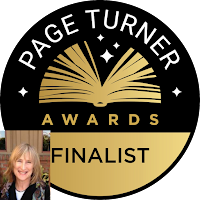 I started seriously writing later in life and the breast cancer diagnosis in 2013 threw me into writing during surgeries and long recoveries. It really took being awarded a scholarship to Prague Summer Writing Program and attending near-month long workshops by accomplished authors to take me to another level. I was the only one there without a formal degree in literature and writing. It was both flattering and intimidating. This experience gave me the confidence to turn my essays into a book and through a few more surgeries, a skilled book editor, and two years diligent work later, I had a final draft of Caution: Mermaid Crossing, Voyages of a Motherless Daughter, which deals with all areas of life from the perspective and rootless foundation as a motherless daughter.
I joined a writing group out of LA (Women Who Submit) and began to learn how I could submit stand-alone essays from my book with the ultimate goal of getting the book published. I've learned a great deal, including the best places for my essays (voice) to be submitted. It often takes several months to hear from the places you submit since the competition is fierce and they rely mostly on volunteer editors to read the work. I had submitted to Chicken Soup for the Soul months back and out-of-the-blue I received an email stating that I was in the running. As you probably know, it's a series and the theme Tough Times Won't Last But Tough People Will was certainly one that my work would fit nicely. The word count was a max of 1200. As I scanned my essays, my eye ran across "Flying Nighties", which I hadn't submitted yet. It was the right word count and only required minimum editing. I threw caution to the wind and went ahead and submitted.
I'm delighted to say that I'm now a published author in Chicken Soup for the Soul: Tough Times Won't Last But Tough People Will and it will be released in local bookstores and online November 2nd. Here is a link to the book website:  https://bit.ly/3a3EgOp

When I realized that "Flying Nighties" was being published and in print, I felt a bit scared because it's a vulnerable, raw, and personal piece. The essay describes my first night home after being away for 22 days in the hospital and nursing home with 24/7 care (since I lived on my own) after a radical double mastectomy due to tumors in both breasts. I arrived home alone with my senior cat on my bed, and it was a hot Indian summer night. I couldn't get any strapless gown over my head because I was unable to raise my arms, so they flew to the bed on top of my kitty. I was hot, in pain, and terrified. I then discovered a breast cancer bag I didn't even remember coming home with. I rummaged and discovered a giant square hot pink (mini on me) night shirt with velcro fasteners in the front. It goes from there.
It's been a long journey and there are certainly times when I lose mojo and inspiration. Like many of us in this world (especially if you're single and without family) during a pandemic and our democracy challenged in this country, loneliness and isolation can take over. There is ebb and flow in life. Getting out in nature is the best remedy. My hummingbirds who visit nectar at my door are spirit angels. Power walking by the ocean moves my body and lifts my spirit. Perseverance does pay off and is the best tool for desired pursuits, growth, and success.... whatever success looks like for you. 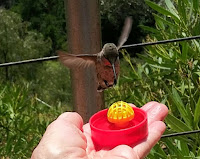